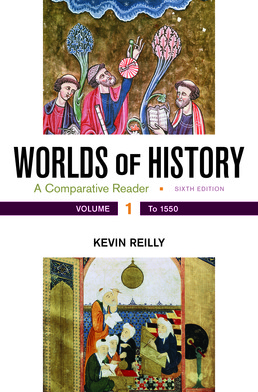 A comparative, skills-building approach to primary and secondary sources

Worlds of History offers a flexible comparative and thematic organization that accommodates a variety of teaching approaches and helps students to make cross-cultural comparisons. Thoughtfully compiled by a distinguished world historian and community college instructor, each chapter presents a wide array of primary and secondary sources arranged around a major theme — such as universal religions, the environment and technology, or gender and family — across two or more cultures, along with pedagogy that builds students’ capacity to analyze and interpret sources.

A thematic and comparative approach allows students to discern common patterns and important differences. Each chapter explores a topic or theme as experienced by two or more cultures. For example, Chapter 3 explores identity in the caste and territorial societies of ancient India and Greece, while Chapter 18 explores gender and family across cultures ranging from Southeast Asia to "New Spain."

Thinking Historically exercises build students’ historical thinking skills. Each chapter-wide exercise offers an overview of a specific critical thinking skill — such as reading primary and secondary sources or distinguishing historical processes — and ties it to each of the chapter’s selections with targeted questions. With the added support of introductory Historical Context sections and chapter-concluding Reflections, the pedagogical tools in each chapter help students analyze, synthesize, and interpret one step at a time.

A wide array of primary and secondary sources offers an abundance of material to work with. Primary sources, which make up two thirds of the readings, range from the Epic of Gilgamesh to engravings by Theodore de Bry. The secondary sources include both essential classic works and current research with such thought-provoking selections as Mary Jo Maynes and Ann Waltner, “Women and Marriage in Europe and China,” and H. J. Fisher, “Islam, Literacy, and Education in the Sudan.”

Over 25% new documents in each volume offer new perspectives, topics, and broader geographical coverage. New primary source documents range from details of early Muslim, Christian, and Jewish encounters, to a fourteenth century description of the causes of the Black Plague, and Pope Francis’s 2015 climate encyclical. New secondary source selections include Shelomo Dov Goitein’s discussion of interfaith relations in Muslim North Africa and Zeynep Tufekci’s article on the impact of technologies on social change. New visual evidence includes depictions of love in both Medieval European and Indian art, a fourteenth century illustration of Aztec education, and an eighteenth century drawing of anatomy from China.

New chapters in each volume feature topics sure to engage students. Volume One includes a new chapter which explores traditions of students and education across the world from the ninth to fifteenth centuries; Volume Two includes a new chapter on empire, religion, and war in Asian, Islamic, and Christian states between 1500 and 1800.

New Thinking Historically exercises in each volume help students build skills. New topics include "Understanding Causes" and "Texts and Contexts" in Volume One and "Author, Audience, and Agenda" and "Empathetic Understanding" in Volume Two. These and the other Thinking Historically exercises focus on developing a specific analytical skill appropriate for the documents and themes in each chapter.

A new electronic format is now available for students. This PDF e-book can be read on a variety of devices, including e-readers, laptops, and tablets.

“This is a unique book in its combination of primary and secondary sources. It is a reader, yet allows the instructor to use it as the sole text for the class, moving away from the rote memorization associated with traditional textbooks and instead fostering the type of discussion that enhances critical thinking and analytical skills.” - Janine Peterson, Marist College

“Worlds of History offers the perfect combination of diverse viewpoints, contemporary documents in modern translation, and presentation of historical context. The book provides material that can be used to create assessable assignments that give students the experience of acting like professional historians.” - Lawrence Backlund, Montgomery County Community College

The urban revolution created writing and interpretation, war and law, individual anonymity, money and taxes, paupers and kings.  Did Mesopotamia, Egypt, and Peru undergo the same development and changes?  We have primary (written and visual) as well as secondary sources to find the answers.

Ancient Greece and India developed with different ideas of society.  Does who we are depend on where we are or who we know?  While finding out, we explore the relationship between facts and opinions, sources and interpretations.

Roughly two thousand years ago the Chinese Empire and the Roman Empire spanned Eurasia.  In comparing these ancient empires, we seek to understand how they were governed. Both required officials, armies, and governing ideologies, but these and other tools of rule were not the same. How was the government of the Chinese Empire different from the Roman? What were the consequences of those differences?

The identities and experiences of women and men of the classical era varied from East Asia to the Mediterranean.  Nevertheless, the predominance of patriarchy in all of these societies set certain limits to the possibilities for women and, in each case, shaped the way men and women related to each other.  We can better understand the great works of the classical age (or any historical sources) by asking about their origins, reception, and intended purpose.

Two religious traditions transformed themselves into universal religions at about the same time in two different parts of Asia as each became part of a more connected world.  Their holy books reveal the changes as well as the desire to hold on to the tried and true.

Christianity, Buddhism, and later Islam spread far across Eurasia often along the same routes in the first thousand years of the Common Era.  Perhaps Judaism did as well.  What made these religions so expansive?  How were they alike and different?  Who converted whom? What did they change, and what did they leave the same?

World history is not just the story of different civilizations. It is also the story of the movement and blending of peoples, things, and ideas across oceans and continents. Migrants, travelers, and traders have remixed almost every aspect of life: political, social, economic, and cultural.

Love and marriage make the world go ’round today, but not a thousand years ago.  Love, sex, and marriage were also not always experienced in the same relationship, even ideally.  These words meant different things to different people throughout Europe and Asia.  We use cultural comparisons to find out more.

Islam, Christianity, and Judaism came into frequent contact in the centuries after 1000. In this chapter, we examine these post-1000 encounters and recognize their diversity. Why did the German city of Speyer invite Jews in 1084 and then allow them to be killed by crusaders in 1095? How do we account for the cooperation between Muslim and Christian armies?  When did Muslim hostility to Christians harden? History is a process of continual change, and here we seek to understand causes.

From the late ninth through the tenth century, waves of Viking ships attacked across Europe; a few centuries later, beginning in 1200, the Mongols swept across Eurasia, conquering all in their path and creating the largest empire the world had ever seen.  What was the impact of these raiding peoples on settled societies and vice versa?  In considering this question and the violent and destructive nature of these “barbarian” raids, we will consider the relationship of morality to history.

The pandemic plague ravaged the population of Afro-Eurasia, killing about one-third of the population of Europe and Egypt. In this chapter, we examine the impact of the plague in various locales while also contemplating its causes and the relation between cause and effect.

Historical Context
Thinking Historically: Considering Cause and Effect
1. Mark Wheelis, Biological Warfare at the 1346 Siege of Caffa, 2002
2. Gabriele de’ Mussis, Origins of the Black Death, c. 1348
3.Giovanni Boccaccio, The Plague in Florence: From
The Decameron , c. 1350
4. Causes According to College of Physicians, Paris, c. 1348
5. Images of the Black Death, Fourteenth and Fifteenth Century
The Black Death, 1348
Flagellants, from a Fifteenth-Century Chronicle from Constance, Switzerland
The Burning of Jews in an Early Printed Woodcut
6. Ahmad al-Maqrizi, The Plague in Cairo, Fifteenth Century
Reflections

This chapter looks at students and education over the long course of human history, from Buddhist monks in Japan and societies in central Sudanic Africa in the ninth century to Aztec society in the fifteenth century. In addition to asking about the context in which the source is composed, we will ask about the context in which the source presents its subject.
Historical Context
Thinking Historically: Texts and Contexts
1. H. J. Fisher, Islam, Literacy, and Education in the Sudan, 1977
2. Ichisada Miyazaki, The Chinese Civil Service Exam, 1976
3. Regulations of Buddhist Monks in a Japanese Mountain School, 818
4. King T’aejo, Founding Edict, Korea, 1392
5. Murasaki Shikibu, The Tale of Genji: Chinese Literacy among Japanese Women, c. 1000
6. Walter de Merton, Merton College Statutes, 1264
7. Codex Mendoza: Aztec Discipline and Education, c. 1535
Reflections

Since the Middle Ages, the most significant changes have occurred in the fields of ecology, technology, and science.  In this chapter we read and assess three grand theories about the origins of our technological transformation and of our environmental problems, drawing on written and visual primary source evidence to develop our conclusions.

Kevin Reilly is a professor of humanities at Raritan Valley College and has
taught at Rutgers, Columbia, and Princeton Universities. Cofounder and
first president of the World History Association, Reilly has written numerous
articles on the teaching of history and has edited works including The
Introductory History Course for the American Historical Association. A
specialist in immigration history, Reilly incorporated his research in creating
the “Modern Global Migrations” globe at Ellis Island. His work on the history
of racism led to the editing of Racism: A Global Reader. He was a Fulbright
scholar in Brazil and Jordan and an NEH fellow in Greece, Oxford (UK),
and India. Awards include the Community College Humanities Association’s
Distinguished Educator of the Year and the World History Association’s
Pioneer Award. He has also served the American Historical Association in
various capacities, including the governing council. He is currently writing
a global history of racism.