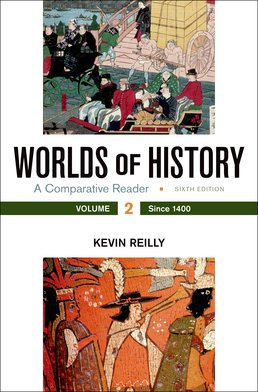 A comparative, skills-building approach to primary and secondary sources

Worlds of History offers a flexible comparative and thematic organization that accommodates a variety of teaching approaches and helps students to make cross-cultural comparisons. Thoughtfully compiled by a distinguished world historian and community college instructor, each chapter presents a wide array of primary and secondary sources arranged around a major theme — such as universal religions, the environment and technology, or gender and family — across two or more cultures, along with pedagogy that builds students’ capacity to analyze and interpret sources.

A thematic and comparative approach allows students to discern common patterns and important differences. Each chapter explores a topic or theme as experienced by two or more cultures. For example, Chapter 3 explores identity in the caste and territorial societies of ancient India and Greece, while Chapter 18 explores gender and family across cultures ranging from Southeast Asia to "New Spain."

Thinking Historically exercises build students’ historical thinking skills. Each chapter-wide exercise offers an overview of a specific critical thinking skill — such as reading primary and secondary sources or distinguishing historical processes — and ties it to each of the chapter’s selections with targeted questions. With the added support of introductory Historical Context sections and chapter-concluding Reflections, the pedagogical tools in each chapter help students analyze, synthesize, and interpret one step at a time.

A wide array of primary and secondary sources offers an abundance of material to work with. Primary sources, which make up two thirds of the readings, range from the Epic of Gilgamesh to engravings by Theodore de Bry. The secondary sources include both essential classic works and current research with such thought-provoking selections as Mary Jo Maynes and Ann Waltner, “Women and Marriage in Europe and China,” and H. J. Fisher, “Islam, Literacy, and Education in the Sudan.”

Over 25% new documents in each volume offer new perspectives, topics, and broader geographical coverage. New primary source documents range from details of early Muslim, Christian, and Jewish encounters, to a fourteenth century description of the causes of the Black Plague, and Pope Francis’s 2015 climate encyclical. New secondary source selections include Shelomo Dov Goitein’s discussion of interfaith relations in Muslim North Africa and Zeynep Tufekci’s article on the impact of technologies on social change. New visual evidence includes depictions of love in both Medieval European and Indian art, a fourteenth century illustration of Aztec education, and an eighteenth century drawing of anatomy from China.

New chapters in each volume feature topics sure to engage students. Volume One includes a new chapter which explores traditions of students and education across the world from the ninth to fifteenth centuries; Volume Two includes a new chapter on empire, religion, and war in Asian, Islamic, and Christian states between 1500 and 1800.

New Thinking Historically exercises in each volume help students build skills. New topics include "Understanding Causes" and "Texts and Contexts" in Volume One and "Author, Audience, and Agenda" and "Empathetic Understanding" in Volume Two. These and the other Thinking Historically exercises focus on developing a specific analytical skill appropriate for the documents and themes in each chapter.

A new electronic format is now available for students. This PDF e-book can be read on a variety of devices, including e-readers, laptops, and tablets.

“This is a unique book in its combination of primary and secondary sources. It is a reader, yet allows the instructor to use it as the sole text for the class, moving away from the rote memorization associated with traditional textbooks and instead fostering the type of discussion that enhances critical thinking and analytical skills.” - Janine Peterson, Marist College

“Worlds of History offers the perfect combination of diverse viewpoints, contemporary documents in modern translation, and presentation of historical context. The book provides material that can be used to create assessable assignments that give students the experience of acting like professional historians.” - Lawrence Backlund, Montgomery County Community College

Both China and Europe set sail for global expansion in the fifteenth century, but China’s explorations ended just as Europe’s began.  What were the factors that led to their similar efforts yet different outcomes?  We examine primary and secondary sources in search of clues.

European encounters with Africans and Americans were similar in some ways, yet markedly different in others.  The cultural clash created a new Atlantic world that integrated and divided these indigenous peoples.  We compare primary source, including visual evidence, to understand these first contacts and conflicts.

Between the years 1500 and 1800, the world saw both the rise of empires and religious conflict and war. In this chapter, we ask about the relationship between these two developments and interrogate sources to better understand author, audience, and agenda.

Historical Context
Thinking Historically: Understanding Author, Audience, and Agenda
1. Bartolomeo de Las Casas, The Devastation of the Indies, 1555
2. Franciscus de Victoria, On the Indians, or on the Law of War Made by the Spaniards on the Barbarians, 1557
3. Martin Luther, Hymns, 1523-1529
4. Benjamin J. Kaplan, European Faiths and States, 2007
5. Abu-l-Fazl, The Akbarnama, 1596
6. Jahangir, Memoirs of the Emperor Jahangir, c. 1625
7. Abdullah Wahhab, Doctrine of Wahhabis, c. 1800
Reflections

With the blinds drawn on the domestic lives of our ancestors, one might assume their private worlds were uneventful and everywhere the same.  By comparing different cultures, we see historical variety in family and economic life and the roles of both women and men.

The eighteenth-century Enlightenment applied scientific reason to politics, but reason meant different things to different people and societies. What were the goals of the political revolutions produced by the Enlightenment?  A close reading of the period texts reveals disagreement and shared dreams.

Historical Context
Thinking Historically: Close Reading and Interpretation of Texts
1. David Hume, On Miracles, 1748
2. Jean Jacques Rousseau, The Social Contract, 1762
3. The American Declaration of Independence, 1776
4. Abigail Adams and John Adams, Remember the Ladies, 1776
5. The French Declaration of the Rights of Man and Citizen, 1789
6. Olympia de Gouges, French Declaration of Rights for Women, 1791
7. Toussaint L’Ouverture, Letter to the Directory, 1797
8. Simón Bolívar, Reply of a South American to a Gentleman of this Island (Jamaica), 1815
Reflections

Modern society has been shaped dramatically by capitalism and the industrial revolution, but these two forces are not the same.  Which one is principally responsible for the creation of our modern world:  the economic system of the market or the technology of the industrial revolution?  Distinguishing different “causes” allows us to gauge their relative effects and legacies.

Colonialism resulted in a world divided between the colonized and the colonizers, a world in which people’s identities were defined by their power relationships with others who looked and often spoke differently.  The meeting of strangers and their forced adjustment to predefined roles inspired a number of great literary works that we look to in this chapter for historical guidance.

Western colonialism elicited two conflicting responses among the colonized –rejection and imitation.  Sometimes both cohered in the same individual or movement.  Exploring this tension through the visual and written sources in this chapter reveals much about the historical process and helps us appreciate the struggles of peoples torn between different ideals.

The First World War brutally ended an era – the world would never be the same after such death and destruction.  We read historical accounts and analyze images from the era so that we can begin to understand the war’s far-reaching chain of causes and consequences.

The rise of fascism in Europe and Asia led to total war, genocide, war crimes, and civilian massacres on an almost unimaginable scale.   How could governments, armies, and ordinary people commit such unspeakable acts?  How can we recognize the unbelievable and understand the inexcusable?

The Cold War was not only a conflict between the United States and the Soviet Union in which both superpowers avoided direct military confrontation, it was also a series of hot wars and propaganda battles, often played out with surrogates, for the creation of a new “post-colonial” world-order and the control of an emerging “Third World.”  A war of words is a good place to look for hidden political meanings.

Demands for democracy are on the rise, challenging and sometimes sweeping away old empires, petty tyrants, military dictatorships, and one-party states. Even “old” democracies are pushed to raise the bar to include social justice, economic opportunity, and a right to education. Where are these movements coming from? Are they connected or coincidental? Are they for real?

Globalization is a word with many meanings and a process with many causes.  What are the forces most responsible for the shrinking of the world into one global community?  Do the forces of globalization unite or divide us?  Do they impoverish or enrich us?  We undertake the study of process to answer these questions.

Kevin Reilly is a professor of humanities at Raritan Valley College and has
taught at Rutgers, Columbia, and Princeton Universities. Cofounder and
first president of the World History Association, Reilly has written numerous
articles on the teaching of history and has edited works including The
Introductory History Course for the American Historical Association. A
specialist in immigration history, Reilly incorporated his research in creating
the “Modern Global Migrations” globe at Ellis Island. His work on the history
of racism led to the editing of Racism: A Global Reader. He was a Fulbright
scholar in Brazil and Jordan and an NEH fellow in Greece, Oxford (UK),
and India. Awards include the Community College Humanities Association’s
Distinguished Educator of the Year and the World History Association’s
Pioneer Award. He has also served the American Historical Association in
various capacities, including the governing council. He is currently writing
a global history of racism.