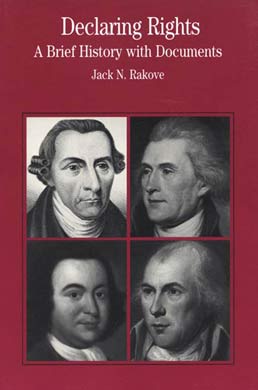 Questions about the original meaning of the Bill of Rights remain a source of active concern and controversy in the twenty-first century. In order to help students consider the intentions of the first Constitutional amendments and the significance of declaring rights, Jack Rakove traces the tradition and describes the deliberations from which the Bill of Rights emerged.

Introduction: Rights across the Centuries

PART ONE: RIGHTS IN REVOLUTION

3. The Colonists' Appeal to Rights

5. Rights in Resistance
Challenging the Stamp Act
2. Resolutions of the House of Representatives of Massachusetts, October 29, 1765
Disputing the American Claim
3. Martin Howard,Jr., A Letter from a Gentleman at Halifax (1765)
Consitutional Rights in the British Tradition
4. John Adams, The Earl of Clarendon to William Pym, January 27, 1766
Declarations of Rights as Instruments of Negotiation
5. Contintental Congress, Declaration and Resolves, October 14, 1774

6. Rights in the First Constitutions
Constitutions: A New Definition
6. Four Letters on Interesting Subjects, 1776
Populist Suspicions
7. Resolutions of Concord, Massachusetts, October 21, 1776
Declaring Rights: The First Models
8. Thomas Jefferson, Third Draft of a Constitution for Virginia, Part IV, June 1776
9. Virginia Provincial Convention, Committee Draft of a Declaration of Rights, May 27, 1776
10. Pennsylvania Convention, Declaration of Rights, 1776
Massachusetts: A Final Example
11. A Declaration of the Rights of the Inhabitants of the Commonwealth of Massachusetts, 1780
A Legislative Milestone
12. Virginia Statute for Religious Freedom, 1786

PART TWO: THE CONSTITUTION AND RIGHTS

7. Madison and the Problem of Rights

11. The Federalist Position
Can We Enumerate All Our Rights?
17. James Iredell, Speech in the North Carolina Ratification Convention, July 28, 1788 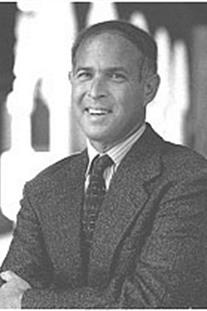 Jack Rakove is the W. R. Coe Professor of History and American Studies and professor of political science at Stanford University, where he has taught since 1980. He is the author of The Beginnings of National Politics: An Interpretive History of the Continental Congress (1979); James Madison and the Creation of the American Republic (revised edition, 2001); Original Meanings: Politics and Ideas in the Making of the Constitution (1996), which won the 1997 Pulitzer Prize in history; Declaring Rights: A Brief History with Documents (Bedford/St. Martin's, 1997); The Annotated U.S. Constitution and Declaration of Independence (Harvard, 2009); and Revolutionaries: A New History of the Invention of America (Houghton Mifflin Harcourt, 2010). He has also contributed essays and articles to numerous scholarly collections, law reviews, and newspapers. In 1998 he testified at the House of Representatives Judiciary Committee hearings on the background and history of impeachment and has served as a consultant and expert witness in the recent litigation over the use of sampling procedures in the decennial federal census.