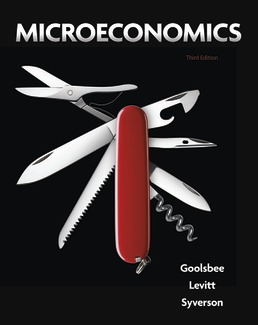 Like no other text for the intermediate microeconomics course, Goolsbee, Levitt, and Syverson’s Microeconomics bridges the gap between today’s theory and practice. A strong empirical dimension tests theory and successfully applies it. With carefully crafted features and vivid examples, G...

Like no other text for the intermediate microeconomics course, Goolsbee, Levitt, and Syverson’s Microeconomics bridges the gap between today’s theory and practice. A strong empirical dimension tests theory and successfully applies it. With carefully crafted features and vivid examples, Goolsbee, Levitt, and Syverson’s text helps answer two critical questions students ask, "Do people and firms really act as theory suggests" and "How can someone use microeconomics in a practical way?"

The authors teach in economics departments and business schools and are active empirical microeconomics researchers. Their grounding in different areas of empirical research allows them to present the evidence developed in the last 20 years that has tested and refined the fundamental theories. Their teaching and professional experiences are reflected in an outstanding presentation of theories and applications.

Give your students access to tools they need to succeed in your course.

The microeconomics text that moves students from understanding the basics of real economic principles to applying the powerful tools of economics analysis. You can’t really learn theory until you try to apply it.

Like no other text for the intermediate microeconomics course, Goolsbee, Levitt, and Syverson’s Microeconomics bridges the gap between today’s theory and practice. A strong empirical dimension tests theory and successfully applies it. With carefully crafted features and vivid examples, Goolsbee, Levitt, and Syverson’s text helps answer two critical questions students ask, "Do people and firms really act as theory suggests" and "How can someone use microeconomics in a practical way?"

The authors teach in economics departments and business schools and are active empirical microeconomics researchers. Their grounding in different areas of empirical research allows them to present the evidence developed in the last 20 years that has tested and refined the fundamental theories. Their teaching and professional experiences are reflected in an outstanding presentation of theories and applications.

The previous edition’s focus on empirics continues. Integration of the empirical dimension is throughout the text in examples, applications, etc.

Figure It Out worked-out problems walk students through the process of how to use economic tools and analysis to think through a problem and develop its solution.

Make the Grade essays point out common pitfalls that students may encounter and help them navigate through the finer points of micro theory.

New applications are found throughout the text and feature interesting topics from toxic algae in Florida and self driving cars, to the importance of business reputations and ultra low cost airlines.

New Freakonomics boxes (How Uber took the Taxi Industry by Storm and Do Traffic Jams Lead to Divorce?, for example) help bridge economic concepts with the real world.

25% new end of chapter problems provide problems for every section of the book.

Figure It Out: online! The popular Figure It Out feature has been expanded by taking 2 problems from each chapter and placing them in an interactive tutorial setting. Video instruction guides students toward the solution of the problem step by step.

"[Figure It Outs] These are the single best way that I learn the material for the class."
— Zach McMullen, Colorado School of Mines

"I really love this book, I think it does an outstanding job of explaining everything in a way that is not only easy to understand, but also extremely interesting."
— Colette de Beus, Occidental College

"I like how the problems use examples that could actually happen in the real world, that really helps me relate the content back to real world decisions."
— Sierra Bearth, Western State Colorado University

"I found the Figure It Out feature the most helpful. It was a good way to test if I was absorbing the reading and if I understood what was going on."
— Emma Ward, University of Washington

"It was easy to read and get a deeper understanding of what was being discussed in class. The problems also matched the material in the book which made for great study material."
— Kyle Gilbert, University of Missouri-Columbia

"Each "real world application" section was very helpful in seeing the economic principles at work in the real world."
— Christopher Craven, University of Virginia

"I absolutely love the Figure It Out boxes. They help so much when I am trying to study for exams or just grasp a concept that is confusing to only read about. I really like that the solution is worked out so you know the process rather than there just being an answer."
— Hannah Hagy, University of Mary Washington

"I like the Freakanomics sections in the text book because they draw me into the reading."
— John Browning, University of North Carolina at Asheville

"I don't like reading, so saying I like reading this book is a big deal. It was more enjoyable to read compared to other textbooks I have read."
— Michael Dimaria, Michigan State University

"The examples are applicable to real life and are easy to understand since they are relatable."
— Monica Bair, University of Miami

"[Figure It Outs] These are incredibly helpful and practical: great seeing an abstract concept in a concrete example." — Emma Partridge, University of Notre Dame

Give your students access to online resources to complete assignments, engage with course materials, prepare for exams and more in order to succeed in class. 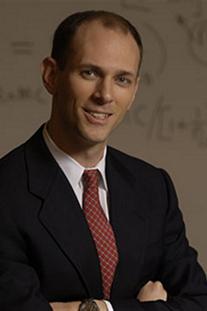 Austan D. Goolsbee studies the Internet, the new economy, government policy, and taxes. Goolsbee explains, "I am a data hound and so I usually end up working on whatever things I can find good data on. The rise of Internet commerce completely altered the amount of information you could gather on company behavior so I naturally drifted toward it."
His research has earned him much professional recognition. In 2003, he was given a grant from the National Science Foundation. Goolsbee was named a 2006-2007 Fulbright Scholar. He will research Internet taxation in the U.S. and European Union while spending part of the upcoming academic year at the London School of Economics and the Institute for Fiscal Studies, also in London. He has been named one of the 100 Global Leaders for Tomorrow by the World Economic Forum, a Switzerland-based group that builds parnterships between business and society.
Crain's Chicago Business has named him one of it's "40 under 40" to watch. He was described by fellow University of Chicago economist and PhD classmate Steve Levitt as someone who "asks questions people care about." His ability to popularize economics has made Goolsbee popular in the media. Besides his New York Times column, he appears frequently on radio, the Web and television. Topics he has commented on include: education and the success rate of terrorists, TiVo's affect on advertising, the real estate bubble, and brokers incomes.
Goolsbee serves as a member of the U.S. Census-Advisory Committee, a research associate for the National Bureau of Economic Research, a research fellow for the American Bar Foundation, a columnist for the New York Times and an economic advisor to Barack Obama.
He has twice been named as a "star" professor by BusinessWeek's biannual "Guide to the Best Business Schools." Goolsbee thinks his research on telecom, media and technology makes his "class on the subject pretty different from what you can find anywhere else." His goal for students taking his classes is for them to leave with the ability to analyze companies, industries, and policies in a new way. He says "that after a lot of years of doing this, they have yet to disappoint me."
Goolsbee spent a year as a special consultant for Internet Policy for the Antitrust Division of the Department of Justice and five years as a Faculty Research Fellow for the National Bureau of Economic Research. He also was the lead editor for the Journal of Law and Economics for several years.
He earned a bachelor's and master's degrees in economics from Yale University in 1991. Four years later, he graduated with a PhD in economics from Massachusetts Institute of Technology. He joined Chicago Booth in 1995.
Insanely committed to his work, Goolsbee was spotted in the classroom on his wedding day, tuxedo and all. He enjoys improv comedy and participating in triathlons. 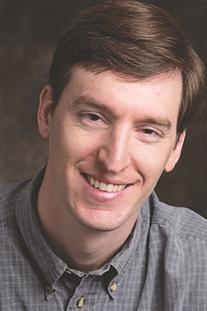 Steve Levitt is the William B. Ogden Distinguished Service Professor of Economics at the University of Chicago, where he directs the Becker Center on Chicago Price Theory. He earned a BA from Harvard University and his PhD from MIT. He has taught at the University of Chicago since 1997. In 2004, Levitt was awarded the John Bates Clark Medal and in 2006, he was named one of Time's magazine's "100 People Who Shape Our World." He co-authored Freakonomics and SuperFreakonomics, and is also the co-author of the popular Freakonomics Blog. 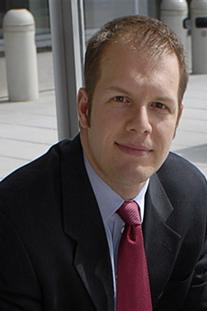 Chad Syverson's research spans several topics, with a particular focus on the interactions of firm structure, market structure, and productivity. His work has been published in several top journals and has earned several National Science Foundation Awards, Olin Foundation Grants, and a Brookings Dissertations Fellowships.
"My engineering background definitely spurred my research interest in productivity. I like to visit factories and investigate how things are put together, what can go wrong when they are, and what factors influence firms' operating success (or lack thereof)."
Syverson is an associate editor of the Rand Journal of Economics, an editorial board member of the B.E. Journal of Economic Analysis & Policy, and a research associate of the National Bureau of Economic Research in the Productivity, Industrial Organization, Environmental and Energy Economics, and EFG Programs. He also serves on the board of the Chicago Census Research Data Center. Prior to these appointments, Syverson was visiting scholar at the Federal Reserve Bank of Minneapolis and a mechanical engineer co-op for Loral Defense Systems and Unisys Corporations.
He earned two bachelor's degrees in 1996 from the University of North Dakota, one in economics and one in mechanical engineering. He earned a master's degree in 1998 and a PhD in 2001, both in economics from the University of Maryland. Syverson joined the Chicago Booth faculty in 2008.

Test Bank for Microeconomics (Online Only)

Learn more about our Test Banks or Sign up for training.

Getting Started Guide for Achieve