Emphasizing the interconnected nature of environmental geology and the multidimensional processes of the Earth, this highly anticipated new edition of Merritt's classic text provides a balanced approach to environmental issues and builds an informed student understanding with case studies, conceptual explanations, and relevant presentation of material. By far the most concise book for its course, it remains the only textbook to use an earth systems approach to exploring how the Earth works, the human impact on the environment, and the characteristics of different natural hazards.

Up-to-Date Case Studies Throughout
Featured in every chapter, cases enrich student's understanding of how environmental events affect the news and their lives—and how scientists study those events to make us better prepared for the future.

New! Earth Science and Public Policy Boxes
This feature looks at instances where research on Earth system processes was instrumental in formulating public policy or law to deal with a variety of environmental problems. Topics include:
—Californias Alquist-Priolo Earthquake Fault Zoning Act, which aims to minimize earthquake damage through stringent development requirements
—Bans by most state legislatures of detergent phosphates to protect aquatic ecosystems
—Ordinances enacted by southwestern U.S. cities to conserve dwindling water supplies Earth Science and Public Policy also addresses the role of special interests and the news media in disseminating misinformation about global climate change.
New! Emerging Research Boxes
Here the authors profile recent and often on-going research projects addressing unresolved issues in environmental geology. Examples include:
—The San Andreas Fault Observatory at Depth an instrumented borehole drilled into the Parkfield section of the fault to study the conditions required for and the characteristics of slip
—Studies of the amount of methane released from melting permafrost as a result of global warming of the Arctic
—Our evolving understanding of the Hawaiian hotspot, which apparently migrates over time, rather than staying fixed (as was assumed in the first edition of this book).
New! Chapter 15. Humans and the Whole Earth System
This revealing new chapter is part of the book's overall expanded emphasis on human impact and sustainability.
A Significantly Enhanced Art Program
The new edition features vividly rendered and carefully labeled diagrams of structures and processes, selected tables and graphs, maps, and impressive photographs.

3. Earthquakes: Their Causes, Hazards, and Risks
The Build-up and Release of Seismic Energy
Assessing Earthquake Hazards
Minimizing the Risks from Earthquakes

12. The Ocean and Coastal System
The Ocean Basins
Coastlines
Sea Level Changes
Seawater Chemistry
Ocean Structure and Circulation
Circulation in the Surface Mixed Layer
Circulation in the Deep Ocean
Coastal Processes and Hazards of Living by the Sea
Coastal Erosion and Attempts to Control It
Controlling Cliff Erosion
Human Impacts on the Seas
Waste Disposal and Polluted Runoff Along Continental Shelves 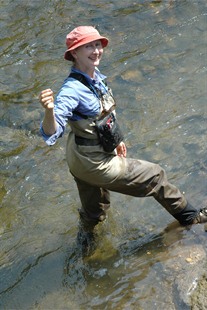 Dorothy Merritts is a geologist with expertise on streams, rivers, and the impact of humans and geologic hazards on landscape evolution. In the western United States, she conducted research on the San Andreas Fault of coastal California, and her international work focuses on fault movements in South Korea, Indonesia, Australia, and Costa Rica. Her primary research in the eastern United States is in the Appalachian Mountains and Piedmont, particularly in the mid-Atlantic region, where she is investigating the role of climate change and human activities in transforming the valley bottom landscapes and waterways of Eastern North America. Recently she partnered with other scientists and policy makers from multiple state and national government agencies to develop and test a new approach to stream and wetland restoration. She is a professor in the Department of Earth and Environment at Franklin and Marshall College in Lancaster, Pennsylvania. She is an author or co-author of more than 70 scientific articles, and the editor and contributing writer for numerous scientific books and field guides. 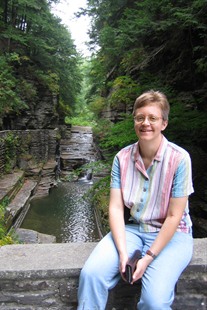 Kirsten Menking is an environmental Earth scientist in the Department of Earth Science and Geography at Vassar College. Her research interests include using lake sediments to unravel Earth’s history of climatic change, linking this history to atmospheric and hydrologic processes through a combination of numerical modeling experiments and collection of weather and stream discharge data, analyzing the evolution of landforms in response to climatic and tectonic processes, and studying the impacts of urbanization on streams. She has published journal articles documenting glacial–interglacial cycles in the Sierra Nevada mountains and adjacent Owens Valley of California, determined the climatic conditions necessary to produce a Pleistocene lake in the now-dry Estancia Basin of New Mexico, and un-covered a centuries-long mid-Holocene drought in New York’s Hudson River valley. Her current research involves quantifying the amount of road salt entering the groundwater system,a topic of concern both for people dependent on well water and for aquatic ecosystems. 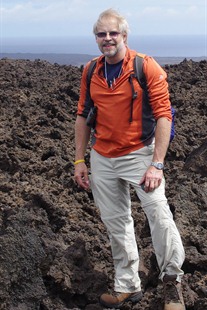 Andrew de Wet is a classically trained geologist specializing in Geographic Information Systems (GIS) and remote sensing and their application to environmental problems on Earth and geological processes on Mars. He holds an honors degree in geology from the University of Natal (now the University of Kwazulu-Natal), South Africa, and a doctorate from Cambridge University, England. He has done field work in South Africa, Greece, the United Kingdom, Mongolia, Chile, Antarctica, and the United States. He teaches environmental geology, GIS and Natural Resources, and an interdisciplinary course on comparative planetology with a focus on Mars. He served as director of the Keck Geology Consortium for three years and has led Keck Geology research projects numerous times. Professor de Wet’s capacity for visualizing complex systems has clarified concepts and inspired students to better understand the interconnectedness of natural systems. Through his travels across seven continents he has acquired a deep knowledge of geological and environmental conditions, which he transcribes into dynamic graphics portraying natural and anthropomorphic processes. He has published articles on geological pedagogy in the Journal of Geological Education and on shared faculty positions in the Journal of Women and Minorities in Science and Engineering and Geotimes. He is a member of the Geological Society of America and the American Geophysical Union. He is involved in a long-standing collaboration with researchers at NASA’s Goddard Space Flight Center and publishes on environmental issues and planetary
geology.

Answers to End of Chapter Questions